Still working on the GNBF video.  It's going to be about 12 minutes long at this point.  Not exactly a short video but I took so much footage!  Man was that a fun event.  Anyway, this weekend the wife and I are headed up to Sioux Falls for Lifelight Festival where my band is playing for a few kids at a rock show.  Well.  About 350,000 kids who love rock music.  But I'll be back on Monday and then I can get this video finished.  I'll also be brewing a fresh hop beer from my garden in the back yard.  My first year's harvest will be fun indeed.  I'm planning on making 15 gallons of wort and using my Galena, Horizon, Centennial, Cascade and Columbus from the back yard.  I'm calling the beer "Pure Hoptonium" and plan on bringing it to the Homebrewer's Festival at Beertopia in October.

Anyway, I'll have more updates this next week I'm sure.  Including the GNBF video!  Get ready!
Posted by Unknown at 9:49 AM No comments: 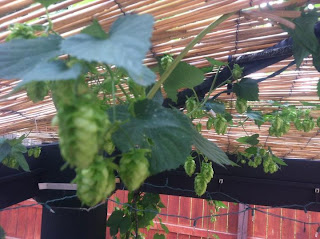