Last Friday was Lucky Bucket's BBQ party shindig at their brewery in Papillion.  There was a homebrew contest and a whole lot of music, beer and Red Zone BBQ.  Representing like champs, the Railroaders showed up with 8 different home brewed beers to share at the event.  I brought out my Honey Ale, Jeff Conrad had an excellent English Brown and English IPA, Vinie had his Witbier, Tom brought a "Mo-Wheat-O" beer, a Watermelon IPA and the club brought out two of our group beers.  The Golden Spike Watermelon Belgian Blonde and the Pink Spike "Cosmopolitan" beer.  There were a few other brewers there but no other clubs really showed up in force other than a member of the S.O.B.s who we accepted as one of our own.  Nice guy but I forgot his name already.  He brought an awesome blueberry beer that was very tasty.

The evening started off with hordes of thirsty Lucky Bucket fans pouring through the entrance to the back parking lot where the DJ had songs playing through loudspeakers.  There was a ton of Lucky Bucket beer on tap, plenty of SWAG to buy, lots of beanbag lawn games,  and our homebrew on tap for everyone to enjoy.  We noticed fairly quickly that the masses converged upon our tent with quite a bit of enthusiasm.  Everyone there was really friendly and loved our beer.  It was great to hear so many awesome comments and critiques of what we had created.  One of the best parts of being a homebrewer if you ask me. 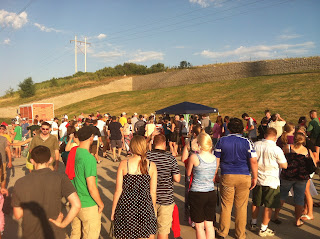 As you can see, there was quite the line for homebrew.  We ended up running out of beer well before we could get samples out to everyone there.  Next year we'll have to bring more.  Overall I think things ran fairly smoothly.  Except for the contest portion of the event.  Now I'm not on here to complain at all, because I really loved the event as a whole.  I had an awesome time and got exactly what I was hoping for as far as the event went in general.  I just think that something could have been done about how the contest was organized for the homebrewers.  It really made things a bit lopsided for brewers who were actually "in the running" for winning and weren't stationed down next to the voting bucket.  I really wasn't pushing my beer too much to people and in fact told people to "make sure you vote for whoever you like."  I'm not sure of a good solution, but an unmanned bucket to drop tickets in at the end of the tables didn't really seem like a good way to go.  I witnessed several of the homebrewers there standing over the bucket several times during the competition and "suggesting" people vote for their beer and even helping them write out tickets.  I also witnessed a female who thought it was "oh so funny" to write out several tickets and drop them into the bucket to vote several times.  Now.  I am not sure which brewer this person was voting for, if it even mattered, or if they were the winner.  But, I do know that there wasn't really anyone there to watch over the bucket to make sure things were legit.  So I can pretty much shrug the competition off as a "hey we kind of want to do this but we're not going to take it too seriously" type of contest.

All of this being said.  I did try the winners beer and believe it was fully deserving of winning the contest.  I do know that several other beers were just as good and maybe a couple were even better.  But I don't want anyone to think that the person who won (don't even know his name but he was a nice guy) wasn't making good beer.  He definitely was.  I just would like to see things organized a bit better next year if possible.  Anyway, there's my rant.  I hope it doesn't make you lose hope in humanity.  I know that it's probably just something that needs a little more attention for next year and it'll be great.  With the chance to brew a beer at Lucky Bucket you made, that's an awesome opportunity for homebrewers.  So definitely a great thing they're doing.  Back to the fun stuff!

So, as I have previously stated.  I haven't always been a huge fan of the Lucky Bucket library of beers in the past.  I wanted to make sure I went through and tried as many beers as I could that night to give them my honest opinion.  Beers change over time and develop as breweries develop.  I must say I found a winner that night in their seasonal "Children of the Corn" beer.  It was really, really good.  I would say that this was my favorite of the night.  This beer gets a 6.9/10 for me and is a great drinkable brew.  Definitely something you should try out if you have the chance.  I also had the lager and my favorite of their offerings the Certified Evil stout.  Anyone who hasn't had the Certified Evil and is a fan of darker beers should go try some when you have the chance.  It is a 7.3/10 for me as far as barrel aged Stouts go.  This beer tastes great with excellent malty fullness, but can sneak up on you.  I have to say I'm still not sold completely on their lager though.  It may just be my taste.  But with other beers there I did like it didn't make it hard to find something to enjoy.  I didn't get a chance to have the IPA that night, but I figure I'll get around to trying it again eventually.  Luckily Tom's wife was driving us home so I didn't have to worry too much about feeling a little warm and happy with my beverages.  I switched to water halfway through the night to ensure I wouldn't keep drinking beer and wish I hadn't the next day.

Super fun times and the barbecue was amazing.  Red Zone really had some good food there.  I might be biased though because we go there quite often for barbecue anyway.

Saturday was brew day.  I ended up having some of the Railroaders over to make some beers at Browar Harvat.  I brewed a Belgian Trippel and my first attempt at a recipe for an Oktoberfest.  Both of which are bubbling away in my basement right now.  The other guys made a few other beers, but I can't remember off the top of my head what they were. 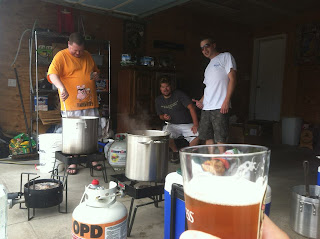 I broke my rules a little bit and ended up enjoying some beer during the brew day.  I don't usually like to drink beer and brew at the same time as I always end up making far better beer when I'm not half cocked.  Both beers ended up just fine though since I once again switched to water part way through my brew day.  During the brewing process I went in the back yard and checked on my hops again and noticed that I'm starting to get some cones on my bines now.  I'm really looking forward to making a big wet hop beer in September.  Can't wait. 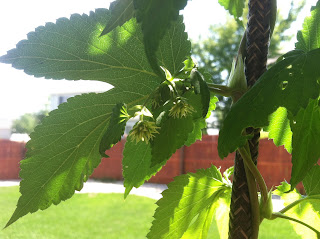 I started brewing at 8AM on Saturday and didn't get through with my second all grain batch until 6:45 that night.  I was fairly exhausted.  But I'm glad I made it through my brew day keeping things sanitary and going through all of the processes I have learned from other brewers and from Mr. Palmer's book. 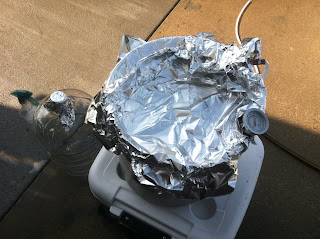 Sunday ended up being a "hang out with the wife day" and we got to go out to Mahoney to enjoy the water park there.  Lots of fun stuff to do there, not beer related I know.  But check it out if you like wave pools and waterslides.

Monday we had our Railroaders meeting at Goldeez restaurant and bar.  The venue was very welcoming and had a lot of great brews available on tap and in bottles.  We had a really big group of members show up.  Its great to see our club getting bigger and bigger.  Lots of new brewers to hang out with and bounce ideas off of.  Not to mention tons of new beers to sample!

The style for our meeting was Farmhouse Ales.  Lots of Saisons to try and some Beer De Gardes as well.  I brought a club beer I fermented for the "Best Damn Beer" competition.  This is our monthly open category competition.  But since it was a group beer I entered it as an exhibition beer.  I brewed and fermented it but technically the recipe was the clubs so I didn't want it to count for anything other than a good shared brew.  The evening went great and I ended up not having to take any leftover beer home.  Always a good sign.

Tonight I'm looking forward to kegging up a Pale Lager, a Red Rye Pale and my farmhouse ale (didn't have it ready in time for competition.)  That will free up 3 fermenters for me so I can brew again this weekend.  I'm scheduled to make an American Brown with David as a collaboration brew.  In my next blog post I'll let everyone know how it goes.

Thanks for reading!
Posted by Unknown at 10:58 AM