Last weekend at Sunfest was a heatwave of fun.  Well at least most of it was.  I love the Beer Corner USA area and the vibe of "we have worldly good beer" that I get when I walk into Beertopia.  Getting there early around 2:15ish we setup at the Railroaders tent.  I tapped my keg of Honey Ale and started making my rounds to go check out what I'd like to drink later.  It was H-O-T outside!  It made things a little rough for a larger man like myself throughout the day, and the perspiration showing through my shirt was proof of how much I must love brewing and beer in general.  I admit I switched to water after about the first 4 hours and even before that I only really sampled beers that truly captured my attention. Overall we were treated very well by the staff and the crew hosting the event.  They put a lot of effort into ensuring entertainment, food, and plenty of good beer was on hand.  The crowd seemed a bit thinner than usual for a big beer event.  I would definitely say that was because of the heat.  Luckily there were plenty of die hard beer lovers there to make the day still feel like a festival.  I noticed that many of the population wandered inside and filled up Huber-Haus and Crescent Moon to get away from the heat.  Which can't be a terrible thing since there was plenty of great beer inside and good food.  I know a couple of us went in to have food and took shifts manning the tent.  This made the day go by easier. 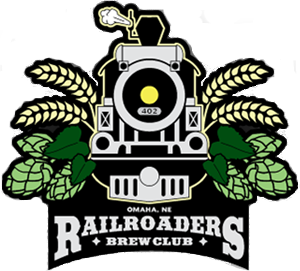 The club is thriving right now and I think it really showed at this event.  We had so many members there that there were more than enough Railroaders to man the taps we had.  I was able to go sample the beers from the S.O.B.s (I always make it a point to do so because Phil and the crew always make excellent beers) and various other commercial brewers.  I think that the public is really responding to the homebrew clubs at these events more and more.  While I saw plenty of people trying out the commercial beer, there was always a healthy line of beer enthusiasts at the homebrew club tents.  We make some crazy and fun beers that people may not get to try elsewhere, and many times will never get to try again.  Small batch beers make a unique and fun draw to the homebrew club tents, like our "Pink Cosmo" which was a beer flavored with purees to match the flavor of a "cosmo" or the "Beat it Nerd" Citra Pilsner.  Which Chris and Kyle made to side with a ring of Nerds Candy powder stuck to your glass to imitate the salt on a Margarita glass.  We even had a Watermelon IPA there that was run through a randall full of sliced watermelon.  It was very tasty and just the type of summer beer you would hope to find at an event like this.  My point is:  I think that the event coordinators are noticing that we are doing a great job and we have become something for the public to look forward to just as much as the commercial beer companies.  It's pretty cool to have the opportunity to share too because the best way (in my opinion) to find out if your beer is any good, is to let the public drink it.  The reactions, ideas, and descriptions you'll get from beer fans is always a great resource to have as a homebrewer.  I think we're lucky to have the cooperation and welcoming attitude we do from events like Sunfest.

So after several more hot hours I went and had a few more beers and special releases.  Empyrean had a really excellent version of their Watchman IPA that was brewed with Belgian Yeast to make a fruity and very tasty Belgian version of the beer.  The guys at Empyrean are always coming over to talk with us at the homebrew tents and try out a lot of our beers too.  Another good example of local brewers that really help support the homebrewers and give great advice.  Soaring Wings had a new stout there that was really great.  At first you might think "why would you want to drink a stout when it's 98 degrees outside?!"  And I agree, that's not the most appealing thing in the world.  But John (Brewer from Soaring Wings) made it appealing with a great idea, he had vanilla bean ice cream to put in your glass and made Stout Floats out of your sample.  It was a very tasty way to have a stout.  I tried the beer with and without ice cream.  The flavors were much different but the beer was outstanding.

Overall I would say that if the weather wasn't a factor this event was well put together and it should have been a top notch event.  Not to say that it wasn't, but I wouldn't blame anyone involved just the weather for my experience.  As a "not so slim guy" I melt under the sun and I always sweat a lot even at the gym.  So A+ for execution but C- for the heat!  Ah well it just makes me look forward to the fall events like Oktoberfest and Extreme Beerfest.  I know I'm supposed to have video for this event, and I do have some.  I'll see what I can do to get it edited in the next few days.  Maybe we'll have a surprise before the weekend.

Sunday I woke up really early to bottle beer at Nebraska Brewing Company.  I have been on their bottling volunteer list for a while and Tyson will send out emails when he needs volunteers.  I agreed the moment I found out we'd be bottling barrel aged Hop God.  Being that barrel aged Hop God is one of the best, if not the best beer I have ever had in my life.  I will usually never turn down the opportunity to go help.  You end up with a couple bottles for yourself once the batch comes out and they always end the day with a ton of food fresh from the kitchen for everyone to eat.  Not only that, but for the rest of the day while you are there you can have as much NBC beer on tap as you like.  After Sunfest I was very much beered out, but after having a "Hop God Memosa" (which is as heavenly as it sounds) I was ready to go. 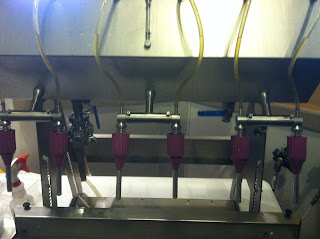 We bottled up the Hop God and after over a thousand fills we were done.  All the beer from the next batch will have been filled by me.  Which is pretty cool if you think about it because everybody will have opened a bottle I filled somewhere in the United States.  We made our way out and had lunch.  Tons of great pizza, pasta, and plenty of Cardinal Pale Ale.  Which is my favorite pale ale on the planet.  The Nebraska Brewing Company crew always treat you well and are very thankful.  They are definitely my favorite brewery in Omaha and I can't say enough about how cool they are to anyone who asks questions, or wants to be a part of what they do. 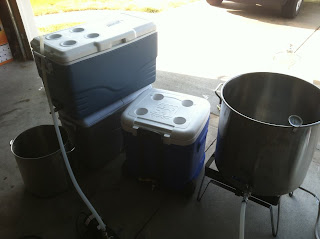 Monday I brewed a Saison.  it was about the most tragically awful wort creation process I have ever had doing all grain yet.  I missed my temps and they were low, I sparged wrong, I overshot my gravity by 4 points.  Ah well.  At the end of the day I am not going to be satisfied unless I hit my gravity spot on or by one point.  But I hear from other brewers that I'm an idiot and 4 points is pretty good.  So, whatever.  I'm sure it'll turn out just fine.  I received a healthy pitch of yeast from my friend and fellow Railroader Tom Malowski.  The fermenter is still going like crazy and I just started raising the temps today.  Overall Tom said to me the other day "don't worry as much about wort creation as you do about a proper fermentation process, as long as you're clean and sanitary it will always still make beer."  Wise words from Tom I believe.

My hops in the back yard are finally starting to reach the top of my gazebo!  This spring I decided to build my own hop gardens in the back yard.  When Tiff and I bought the house we had acquired a nice big gazebo but it didn't have a canvas or roof on it.  It also had a broken leg on it.  I went to the hardware store and bought some supports and we bought some "hawaiian looking" reed fencing that we converted into a roof for it.  Now when we have people over and want to bust out the tiki torches it fits right in.  But the best part was when I started digging holes and cutting out grass.  MAN, was my wife stoked when I started doing that.  (hahaha.)  Anyway, the result was several small gardens separated by 2x4s and a bunch of small rhizomes were planted that I didn't think would amount to much. 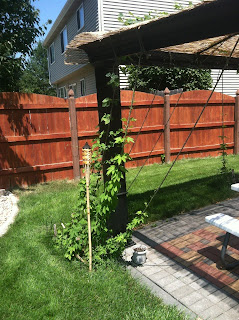 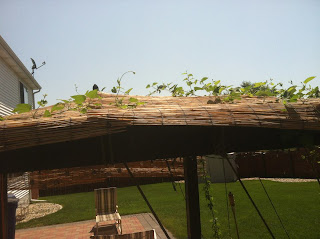 As you can see, they have really taken off.  They're already up on the roof and I'm getting little hop cones forming on some of the branches.  Pretty exciting to me.  I am looking forward to making a wet hop beer with all my own homegrown hops in a few months.  I have Horizon, Columbus, Centennial, Cascade and Galena growing.  All of them are doing really good except for the Horizon which is just now waking up and starting to climb.

For my last portion today I want to bring up Lucky Buckets "Beer-B-Q" thing they're hosting on Friday.  I'm bringing some beer out for it and I am keeping an open mind about things.  I have heard that Lucky Bucket has begun working on improving their quality and I have also heard a lot of good things about some of their new seasonals.  I admit I haven't always been pro-LB and their lager, which used to be really great, has fallen short for me in recent attempts to enjoy it.  While their lager might not be my thing, I really want to give them a good shot this weekend and try as many of their new beers as possible.  It'd be great to be pleasantly surprised.  I guess we'll see.

Thank you for taking the time to read this far into my mass of thoughts.  Hope to see you all at the Lucky Bucket Barbecue this weekend.  Come out and hang with me at the Railroaders tent!